Case Studies - Water Leak Detection in a block of flats 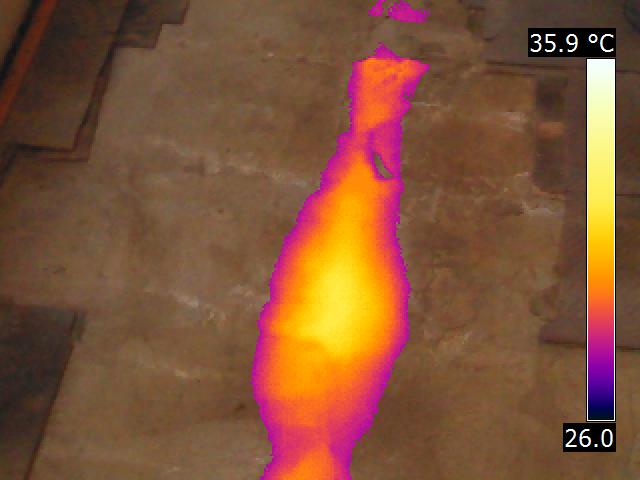 To find a leak in the central heating system in a block of flats with retail units. This leak was somewhere under a foot of concrete.

A large residential and commercial agency with a management arm attached, House and Sons, asked ThermoSurvey to undertake a water leak detection survey in a large block of flats.  The company had spent a great deal of time and effort trying to identify the leak through conventional means. A leak within the central heating system had caused a reduction of pressure in the boilers thereby cutting off all heating to most of the flats and retail units of the block during a cold spell.

ThermoSurvey spent a day surveying the ground floor where the suspected leak was located.  As the retail units on the ground floor were in use it was extremely difficult to get a clear view of the floor. However an anomaly was spotted in a restaurant under a table. It was about 2°C hotter than the surrounding area and was approximately the size of a drinks coaster. The carpet was removed and it was found that under this was a layer of wet wooden parquet. This was alo removed to reveal the concrete floor. The humidity meter was used to confirm that there was an area of damp and the next day a hole through the concrete to the encased pipes was made. At the exact location that was indicated by the survey, two pipes had sprung a leak.  These pipes were encased in asbestos which was encased in a foot of concrete under a parquet floor and finally covered by a carpet.

The individuals doing the repair work stated categorically that there was no way that they could have found this leak using other techniques, and that the tenants of the restaurant were very happy that in 48 hours the leak was found and repaired and that they could continue with their Christmas trade.

The approximate saving to management company up to £130, 000.

If you need us to undertake a water leak detection survey why not give us a call.

“Trying to source a water leak in an old building is a very difficult and costly job especially when many of the pipes run through concrete floors. Where do you start to dig to find the leak? I looked for a Thermal Imaging Company and came across The Energy Reduction Consultancy. As they were local to the property, I called and we agreed to meet. Anthony arrived a couple of days later and checked the whole of the ground floor. He found some areas of concern and also sourced a leak which would have taken a considerable time to find without his assistance. I would have no problem recommending this company and would definitely consider using them again if the need arises.”- Senior Property Manager